When did he grow up enough to be such a good sport?

Here’s how I see him, when I’m not really thinking about it. 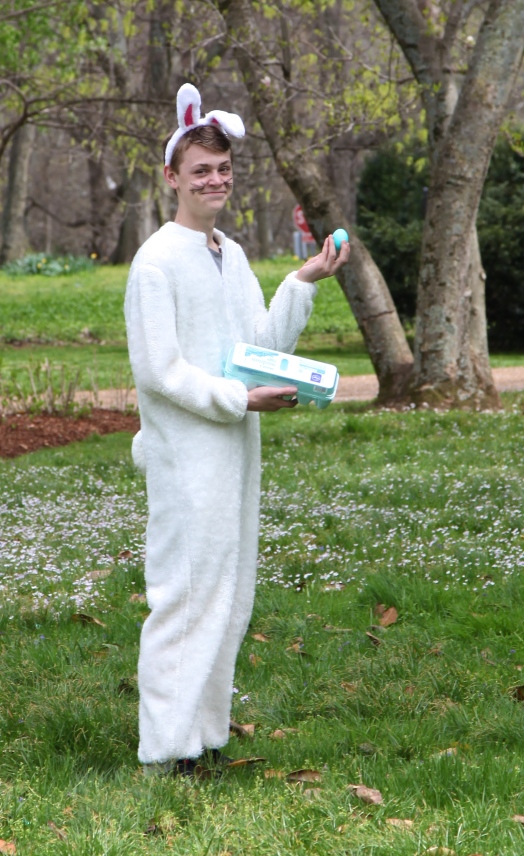 Thanks again to Jennifer Puryear for including me in her tasty book club! Follow her at  www.bacononthebookshelf.com.

Fantasy can be tricky.

It can make you stockpile empty photo albums, blank journals, and unfinished needlepoint kits. Your cobwebbed mountain bike? Your “Kitchen Gardens” Pinterest board?

Cosmetics that flaunt the “M”-word? 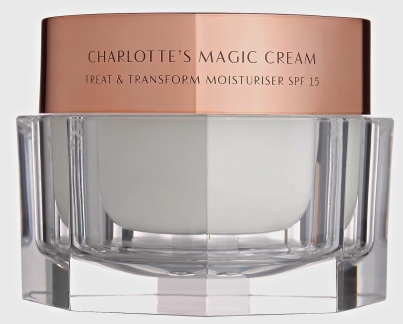 But it can also work wonders. Take two cookbooks that have kept me busy all this grey, homebound winter: Heritage, by Sean Brock, and A Kitchen in France, by Mimi Thorisson. I confess, I bought them both out of sheer fantasy. Just look at these covers: 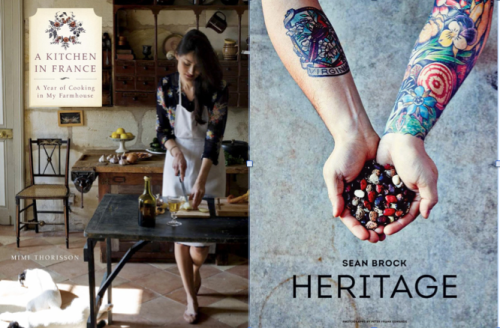 They push every button, don’t they? Gorgeous woman, heirloom dogs, stately romantic kitchen. Check. Next, jewel-rich beans, scarred stone worktop, genius tattoo. Check. (And yes, every true Virginian secretly covets that cardinal tattoo. As if we were that hip.).

Inside both books, the fantasy goes deep. Sean Brock, the rock-star James Beard-winning chef of Husk restaurant fame, describes learning to love food as a boy on his grandparents’ farm in Wise County, Virginia, coal country deep in Appalachia. He writes, they “plowed the fields with Haflinger horses and grew plants that were indigenous to our culture.” Their house “was a beautifully mysterious playground, filled with bubbling vats of wine and fermented ears of corn. Every inch of [the] basement was covered with preserved food.” I can smell that sweet dark cellar from here. Mimi Thorisson, raised in Hong Kong and educated in Paris, left a career in television journalism to settle in Paris with her handsome Icelandic photographer/art director husband. Their family had grown to three young children (plus his two older children), a baby on the way, and five dogs when they decided to pull up stakes and move to a farmhouse in the Médoc, near Bordeaux. There, she writes the luscious food blog Manger, at mimithorisson.com. 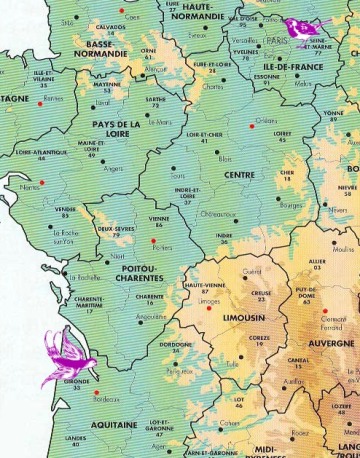 In A Kitchen in France, she admits that her “current country lifestyle – complete with a big rowdy family, lots of dogs, and a huge kitchen where I can make all my culinary fantasies come true – is something I always wanted.” Well, yes, I’ve joined that club.

But here’s the thing. Unlike Magic Face Cream (or the post-Christmas gym membership), good cookbooks sell a fantasy you can achieve just because you want to, on whatever day you choose. And these two cookbooks are terrific.

So, for a crowd coming to watch the Patriots play the Colts for the AFC championship? Here’s what looked good to me: Sean Brock’s slow roasted pork, tomato gravy, and creamed corn. For dessert, buttermilk pie with cornmeal crust.

I’m not saying it tasted like Husk, but the recipes all worked. By the end of the game, I had grown men eating pork with their fingers straight from the serving platter. Fantasy? Yes. Magic? No.

Then came February. Iced in for days with three fidgety sons: of course, I cooked like mad. And practiced my French. I made potato pie with Comté cheese, and I made pear flognarde. 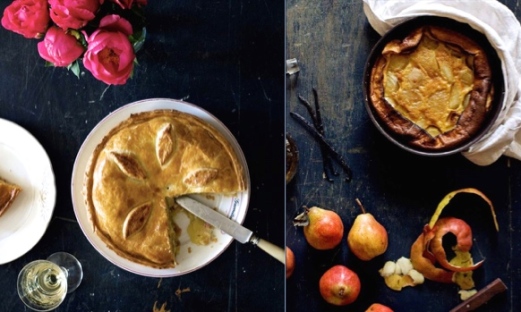 I made slow-roasted lamb, and apple tart with Calvados and crème fraîche.

I made Garbure des Pyrénées: 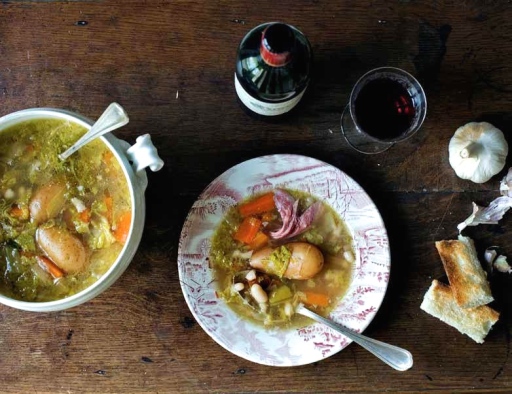 Sure, Mimi Thorisson’s garbure recipe comes with the story of how she learned the soup from her friend, a charming Bordeaux antiques dealer. Very chic.

But at heart, garbure is just beans cooked with cabbage and a ham hock, fragrant for hours on the back burner while you play Monopoly and Scrabble and hope school gets cancelled again the next morning. It’s soup to feed a house full of restless boys, and then send out to friends who didn’t have time to cook that icy day. It’s soup that can prompt your mac-n-cheese-atarian to flip through the cookbook, point to a photograph, and ask for this:

Pig in a blanket, you say? We call it Lyonniase Sausage Roll. And we’re eating it for supper.

Fantasy at its best.